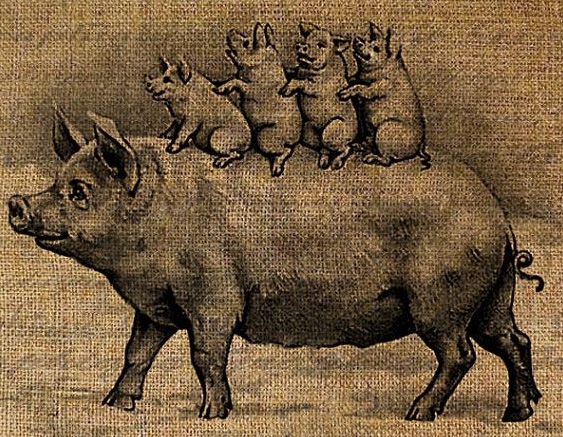 If ever there were a question that encourages a bit of piggybacking from the 51Blocks digital marketing team's answers, this is the one. And for that action, we will make no apologies. You Make No Apologies for Piggybacking...Wait What Blog is This?

Alright, I may have missed a bit of substance between the first and second sentences of this post; allow me to revisit and clarify.

I believe that piggybacking, when describing the actions of two people, has a negative connotation (at least for one of the agents involved). The act itself involves one party (the lesser party) using the momentum generated by another party (the greater party) to provide lift or propulsion above and beyond what the one party (the lesser party) could have generated alone. In essence, using the energy of another to gain an edge personally for oneself. A bit shady, from any perspective.

How very true. In fact, when piggybacking describes the actions of "wireless packet routing", or "trans-continental shipping coordination" or "compiling computer resources to enable awesome number crunching power" it's synonymous with fluid problem solving by maximizing resources through agile responses that enable efficiencies cleverly uncovered.  Furthermore, routed data packets aren't susceptible to personal motives like looking for a short cut to enhance one's professional profile even though very little personal ingenuity went into the result at hand. That behavior sounds a lot more like people than trans-continental shipping route optimization.

When viewing the entire framework in place around the notion of piggybacking, it should be understandable why the 51Blocks' staff would want to keep their distance. Call us innovators, communicators, originators, inventors, optimizers, creators, heck even terminators - anything is better than being referred to as a piggybacker.

How About an Apology for Overworking Your Premise?

Why, then, are we unwilling to apologize for our own obvious piggybacking behavior in the video below?

Simple: SEM campaigns are complex (and a bit sensitive by nature)

The industry, generally, is in constant upheaval. Competitors are up and down and all around, looking to usurp the real estate you've tenuously gained just recently and sneakily targeting the real estate you've held secure for years. The victories from last month are worth less with each passing day setting up the perpetual chase for more, more, more victories needed to be secure into next week. Activities parade by in an endless cycle to stake out more virtual space. All this as the internet's foundation changes fundamentally again leading confidence to drift away one Google update at a time.

So You're Saying It's Not Worth the Effort?

No, no, no, no, no - not at all. The fact that it's difficult just makes it that much more rewarding. The reality is that in this hostile landscape, to consistently deliver the best results available in every SEM campaign we construct, it doesn't hurt to share a bit of what's working (and what's not) in real time with your colleagues. That's real time, as in RIGHT NOW, today, this minute and where have you been already with this strategy?

As a result, to combat all of these obstacles, the team at 51Blocks isn't above a little piggybacking. Doing so helps us dial in the best of what's working now, discard the activities that are losing ROI, all while eyeing the strategic trend emerging from peripheral campaign work within the agency that folds perfectly into the SEM campaign's goals.

All Of That to Finally Tell Us Your Team Uses Collaboration? Really?

Well, yes, that's one way of putting it. And there is the quintessential illustration of piglets on a pig's back and...well...we say piggybacking (?) a number of times in the video clip and that led to a circuitous route of introduction that is admittedly running on too long here and...anyhow...it's a good video - watch it!

As a bonus, can you find all the"piggyback" instances in today's Friday confessional? The first correct answer in the comments wins a personalized prize from the 51Blocks' team so start counting!

Justine - And I’m Justine behind the camera.

Reggie - Alright I think the thing that makes campaigns run easiest, or the best I should say, is interaction between what’s going on internally with the client’s business and their local or SEO efforts. I think the more you can engage with the client and what they’re doing, you can align that to your strategy and all of the sudden the online experience and the experience from the person (or when their conversion goes into the store or whatever) becomes a lot better because of one joined experience as opposed to two separate entities where you have a great SEO campaign but you get into the store and they have a disconnect. So I think aligning those two things is 1) the ultimate goal of Google, and the ultimate goal of customers. I think that’s what makes things go the most swimmingly.

John - Hmm, I hadn’t thought of that, good answer. I’ll go next then. So for me it’s simple - get results. Find a way to make things happen. Every campaign that’s run well for me ever has been because certain things are going right, and that means results are occurring. Website strength is building, rankings are improving, traffic’s getting more qualified, conversions are being more streamlined as they walk in the door.  All of those are results. Get results and the campaign will run smoothly.

Anna – To… work off of that...what I kind of thought is making sure that their goals are outlined in a way that you understand them and that you can ensure results because if what they consider good results are not measurable then you’re going to have a hard time proving the value in their campaign. So outlining that from the get-go, I think, is majorly important.

John - So you’re saying when you set up a goal, it’s something that the client is involved with? Or your setting goals, explaining why there’s value in that goal, and then moving them toward them?

Anna - I think it's a little bit of both, but more so outlining the client goals so that way the work your doing is synchronized with the efforts to meeting those results, or to be able to provide those results and in a measurable way.

John - And is there education then, that you have to go through with clients to get them to that level?

Anna - In my experience nine times out of ten.

John - I would guess so. That’s good too.

Sonya - I mean ideally, “yes," we want to show results but sometimes that comes with a whole slew of other components that we may not see on the forefront of the campaign. And so, I think for a successful campaign, or a campaign to run well, we have to have the engagement with the clients as Reggie was saying. If there were previous SEOs or other factors that may have hindered their ability to grow or produce conversions we need to know that in the beginning so that we strategize their task load in accordance with that information. And it does make our job a whole lot easier if we do know any issues or any problems that they may have come across previously in their campaign before we start with our work.

Justine - To continue on that, I’d say that there’s a lot of companies out there that don’t have the personal relationship with their clients. They’re so big and they’re so, you know <streamlined>…I don’t want to say corporate but sometimes you get that kind of corporate structure where you’re more of a number than you are an actual person.  Whereas if my client calls or emails me I know who they are, I recognize their voice. I think having that personal relationship can help me earn a lot of trust with clients just because they’re so used to being treated like:

That’s really hard when you’re going from that kind of work to a new business and you're like "well can I trust you?” Having that personal relationship is really clutch to getting that trust.

John - Alright, my answer was too simple. You guys were all better than me.

Anna - Results are huge though, I mean people do…they are paying for something.

John - I agree but all of your answers were better than mine, let’s be honest. To that final point that you made, not many places do customized service to the level that we do. We go down to the granular level with every client and give them something that’s unique and personal. I think that’s part of the reason that campaigns tend to run well here.

Register For The Webinar!